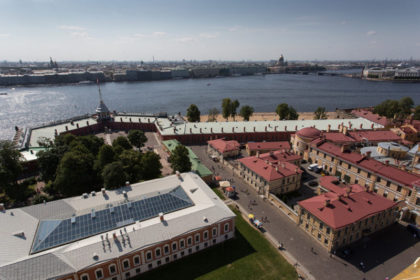 The second highest, but the most popular observation deck and visit card of St. Petersburg – it offers a magnificent panoramic view of the city, especially beautiful during the White Nights period. Must-see in any tour to the Northern Capital. From here you can see perfectly Vasilyevsky Island with the Academy of Arts, the Admiralty, the Winter Palace, the building of the Senate and the Synod, and other architectural monuments that have become the face of St. Petersburg. Binoculars are installed at the site of the colonnade, and in the summer period it works at night!

It is located on the second level of the three-tiered bell tower of the cathedral. From the western and northern sides, panoramas of the Vasilyevsky Island and the Petrograd Side are opened. And from the opposite (southern) part you can see the Admiralty and Palace Embankments. In the so-called Russian belfry, massive bells and a fencing net block the panoramic view.

Next to the Peter and Paul Cathedral there is a so-called “walking route”, which operates on the roof of one of the walls of the Peter and Paul Fortress – from Gosudarev to Naryshkin bastion. It is not very high here, and some argue that the view does not differ from the same from the embankment below wall. However, most people would be unanimous in their opinion that one of the best panoramic views of the historical center of St. Petersburg opens from here.

Another place with a magnificent panoramic view on the Petrograd side – the restaurant “NEVESOMOST” for several years in a row, during the warm season, all of the guests of the site enjoyed a romantic view of the rooftops of St. Petersburg. In 2018 the restaurant has completely changed. What remains unchanged is that any guest can admire a magnificent view of the old part of the city from the height of the 10th floor with a glass of good drink and use the binoscope.

Observation deck at the Smolny Cathedral

Not many people know about this viewing point, although the belfry of the Smolny Cathedral is the highest official viewing point in St. Petersburg. From here there is a beautiful view of the Neva river, the Smolny Monastery, you can also see other sights of the Northern capital! The observation deck of the Smolny Cathedral is located at a height of 50 meters and in order to climb it, it is necessary to overcome 277 steps.

Another observation deck accessible to everyone is the Ferris wheel in the city amusement park on Krestovsky Island. Here you can see the city from a bird’s-eye view: the picturesque landscapes of the Primorsky Park and the beauty of the Gulf of Finland, the St. Petersburg Arena. Especially beautiful here at sunset, when the sun goes down over the bay!

You can also see the northern capital from a height by visiting the Karl Bulla Photo Studio, a pioneer of photography located on Nevsky Prospect. The museum’s balcony overlooks Nevsky Prospect, Sadovaya Street, the Alexandrinsky Theater, Ostrovsky Square and the Russian National Library.

With the opening of the new stage of the famous theater, residents and visitors of the city had the opportunity to admire the views of St. Petersburg from the roof of the famous theater. The terrace opens its doors in the summer period one hour before the start of the performances, and closes already 10 minutes before the start of the productions. True, only spectators can get here, and for the entrance to the terrace you have to pay. But the view here opens no less remarkable: the old part of the city and the perspective of the Kryukov Canal.

On the coast of the Lakhta tower, the construction of a grandiose skyscraper is being completed. It will reach 462 meters in height, and depending on the time of day the building will change color. It is expected that “Lakhta Center” will become a new point of attraction for citizens and tourists. One of the main attractions, which was mentioned more than once, will be a viewing platform at an altitude of 370 meters above sea level – this is the highest point of the skyscraper (hereinafter referred to as the spire)!

The business quarter “Nevskaya Ratusha” very soon will earn a unique observation platform, from where a charming view of the city will open. Visitors to the “Neva Town Hall” will be able to take the elevator under the dome and admire the Northern capital from a favorable angle. Rumor has it that the dome will be unique not only for St. Petersburg, but also for Russia as a whole: assembled from double-glazed windows, it is curved in two planes.